I’ve always mentioned Arts in this magical path, that people don’t practice art anymore, everyone always dream of invocation/evocation (using mind’s eye, astral evocation). No one seems to show interest in magical Arts anymore. But I haven’t actually talk about any Art, so I thought of talking about Ars Paulina also known as Pauline Art.

This Art is one of Solomon’s Lemegeton’ books, the third. The Pauline Art consists of Spirits governing the Planetary Hours, and Spirits that belongs to every degree of Zodiac, of the Signs, and the Planets in the sign.

The Orders of Spirits described in the Ars Paulina are good in nature; they are called Angels.

Know ye that the success of the Pauline Art depends on…

1. The construction of the seals attributed to the twenty-four ruling hours of the day and night, which seals must exhibit the proper astrological signs referable to the day and hour of each intelligence.
2. The proper planetary incense.
3. The astrological seals referable to the chief intelligences of the Twelve signs under the presidency of the four great Archangels.
4. The crystal or mirror, consecrated, into which the zodiacal spirit must be called by the operator.
5. The ceremonial use of the invoking formula.

The Table Of Practice of Ars Paulina.

My Experience.
I was first confused about the table because someone told me the table from Sloane MS. 2731 isn’t correct and gave me another planetary Characters.
Well, I went for it straight up. I got a thick quality plywood. Bought the paints, colors are:
Gold for Sun
Purple for Moon
Green for Venus
Red for Mars
Blue for Jupiter
Orange for Mercury.
All of this as I was directed by the master of the Art. It was early 2016. 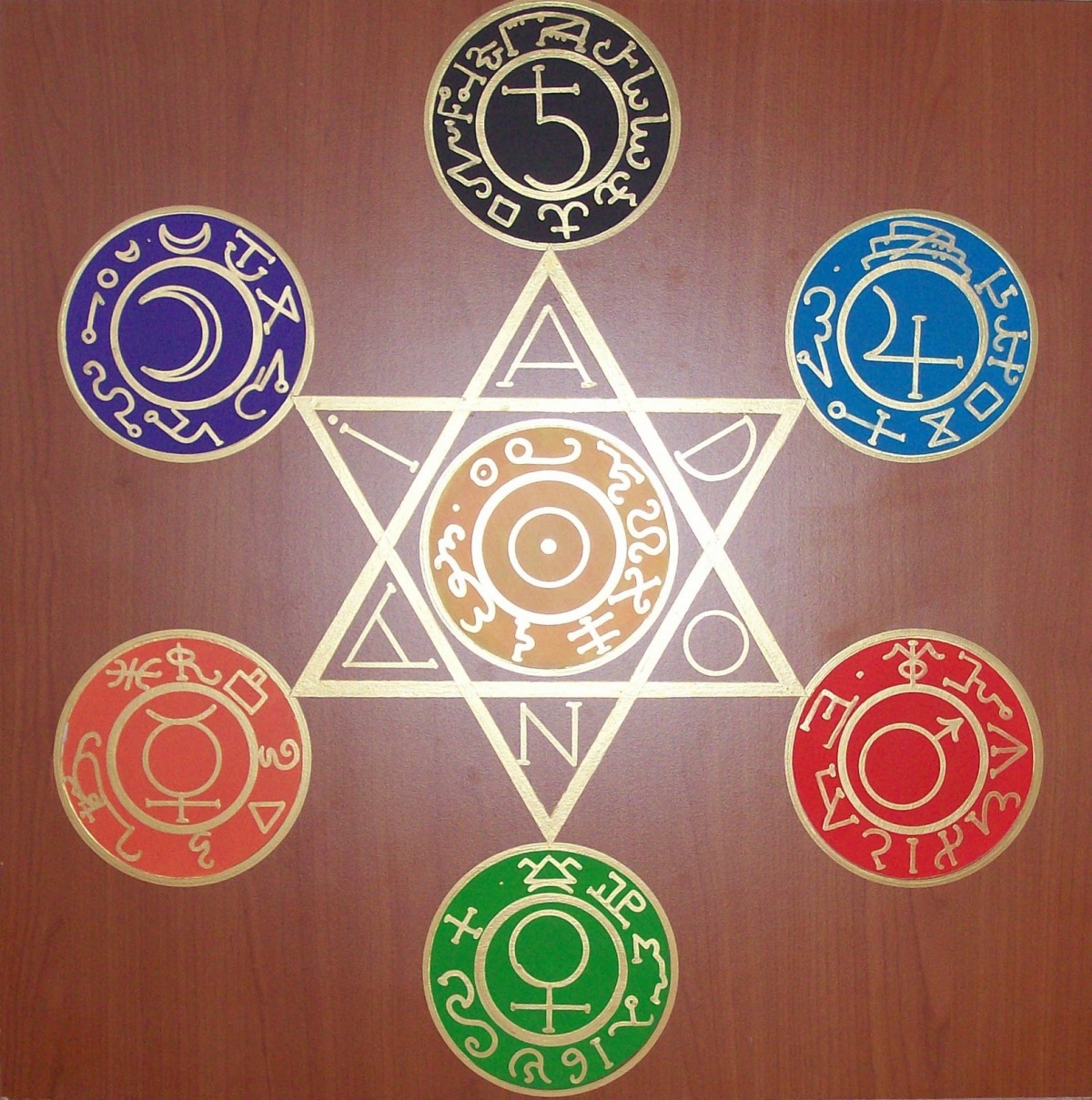 Here is the Table of Planetary Hours I used:

This Art requires lots of calculations, wasn’t easy at all. I choose to call a Venusian Spirit whose name is Chardiel.

From the book: “The 2nd hour of the day is called Sovormi, and the Angel that governs this hour is called Anael, who hath 10 chief Dukes to attend him, whereof we shall make mention of 9, but the 3 first are of the Chief & the other 6 are of the under Dukes. They have 330 servants to attend them. These 9 are as followeth: Menerches, Sarchiel, Chardiel, Orphiel, Elmoijm, Ruosiel, Ermosiel, Granijel, & when you have a desire to work in the second hour of Wednesday on the 10th. day of March make a seal before on clean paper or parchment, writing first the character of the Lord of the Ascendant, then the rest of the planets & the Sign of the 12th. house as you see it in the Sigil. & when it is made, lay it on that part of the Table that hath the same Character as the Lord of the Ascendant is. Observe this rule in all the following part you cannot err. Then say the Conjuration at the latter end.” 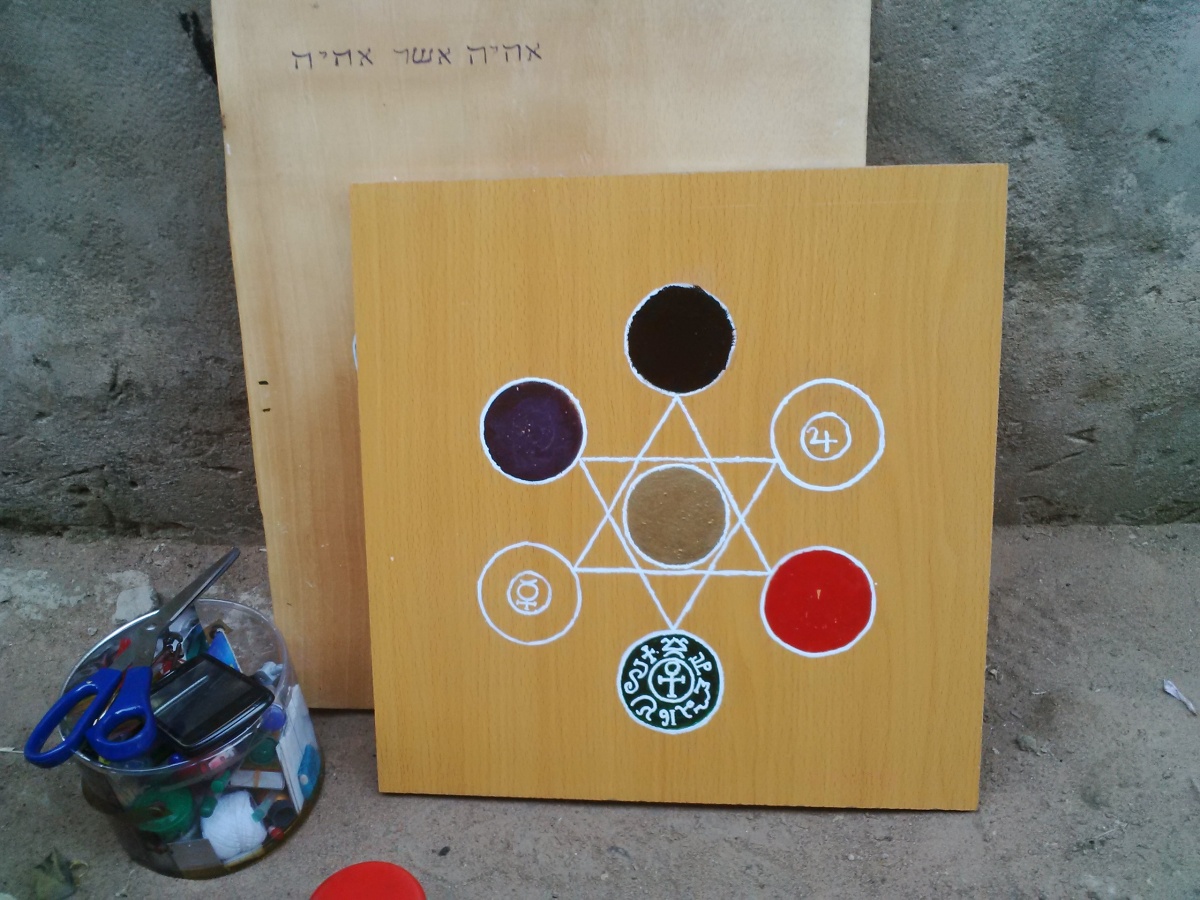 I choose Friday to perform this operation. I woke up early, I had a purification bathe. I already did some cleansing before that day. I have observed 7 days fast. I wore my white vestement.
There is a space in my room I put separate, and used a long white cloth to cover. Magic is a seed of Occultism, and everything Occult is done in secret. So I had to create a space for the experiment.

That Friday morning in the year 2016 the sign of the 12th house that was up is Pisces. I prepared this talisman just as the book described. I couldn’t get a crystal, I made used of a consecrated mirror.

The observation to be observed is making the Seals of the 24 Angels according to the time of the Year, Day and Hour, set to call the Angels. And to make a seal for any of them, do as follows: First write the Character of the Lord of the Ascendant; secondly the Moon, afterwards the rest of the Planets, from the fastest to the slowest (counter-clockwise), and after then the Character of the sign that ascends on the 12th house.

I layed the seal of that part of the table that corresponds, and recite the Conjuration.
I started with the invocation of the Chief Governing Angel.

Invocation Of The Chief Governing Angel:

O’ mighty and potent Prince Anael, who art the ruler and governor of the second hour of the day by the decree of the Most High God, King of Glory; I, the servant of the Most High, do desire and entreat you by three Great potent Names of God Agla, On, Tetragrammaton, and by the Power and Virtue thereof, to assist me in my affairs and by your power and authority to send me, causing to appear before me, all or any of the Angels whom I shall call by name, the same being resident under your government. I do further entreat and require that they shall help in all matters which accord with their office, even as I shall desire, and that they shall act for me as for the servant of the Most High. Amen.

Then I moved to the invocation of the Duke Angel.

During the time I was doing the invocation I was feeling great cold. I mean, the cold that’s sweetening me. It was very cold but I’m not shaken I was enjoying it. I noticed that I started sweating, my skin looks different, looking more clean and like it’s glowing. At this time fear catch me, where it came from I don’t know but I didn’t stop the invocation. My voice start shaking, then different thoughts jumped into my head, I was like, is this real? I’m really gon’ have a physical encounter with an Angel? Me? My voice couldn’t pronounce the invocation words clearly anymore but I didn’t stop. The clothes I used in covering the secluded place for experiment started blowing as if there is a strong wind in the room. The clothes then look brighter, whiter. Then everything stopped in an instant. Nothing on the mirror or anything. No sight at all.

I was highly disappointed. I had to wait for the next hour of Venus. I did the invocation again but nothing at all. What I would say happened…I don’t think it has anything to do with what I was doing then. There was great lightning and thunder.

I waited till midnight, an hour of Venus. I read the prayer called ‘Confession’. I did ablution. I prepared hot coal and took some incense with me. I made used of Temple Incense.

I did the invocation again, and all that happened at the first try happened again. And I saw a beam of light landed on the table of practice. I was looking at it like, what’s this? And it slowly vanished. Next thing is that I saw a face appeared in the mirror, looking at me straight in the eyes. I offered the incense. And as the incense smoke rise up, He smiled. First words he uttered was, “What do you desire?”.

But I was angry and pissed that I didn’t succeed at first try. He explained himself. That some Spirits came to disturb him and that’s why he couldn’t come in the morning. He said in the afternoon that I called him, there was a roadblock for him and he couldn’t come at all. That he had to sent out his warriors to clear the road, erase every dirts on his way to me. And that he was concerned maybe I will give up or I will call him again.

He revealed things about my future. He’s a dreadful angel himself, but very calm and beautiful in appearance. Chardiel is his name.

I spent two hours with him or even more, asking questions, learning. I read the dismissal when we got done.

Lots of things happened during our time together, things I can’t voice out in the public, I can only discuss them with an initiate.

To Protect Our Homes From Stray Troublesome Spirits.

My Experience With Permasiel: To Clean Poisoned Food Stuff.

I, Lux Fero, I’m a Sage based in Lagos, Nigeria. I have been involved in the Occult for most of my life and have experiences in Invocation, Preparing Talismans, as well as helping clients that solicit my services. My experiences written are genuine and individuals that have some knowledge on Solomonic Magic can attest to it’s authenticity. In view of that, these are my true personal experiences with the Occult. They stand for the general public and serves as me bringing the light to previously hidden knowledge. – Lux Fero, Light Bearer.

If you want to learn how to make the Solomon Pentacles into a seal; avoiding the costly medal Pentacles, and more, purchase my PDFs:

It’s a book that consists of powerful and potent working spells, charms, previews are available on the blog.

Senses Enhancement: To develop our Senses, Clairaudience and Clairvoyance. Even our Spiritual bodies known chakras; beside seeing and hearing, there is smelling and sensing. The ability to be able to see at a glance the exact solution to a problem…are all part of developing our Spiritual Senses.

Advanced Energy Work: This energy works are exercises that will be performed in the astral, to challenge yourself and test your skills and abilities. To know your limits and how you can advance Spiritually. It also helps in learning about the Spiritual realm; the dangers there and how to thread it. Even soul travel is part of the Energy Work.

Art Of Invocation: I discussed about invocation, introduction to magic and the rules and laws that will be your guide; you’ll have no fear to summon or call Spirits. Nor would an imposter come in to answer to your invocation. Nor would you have fear of been terrified by parasites, as many people believe that invocation is dangerous, it leads people to early grave. But the truth is that those who don’t learn about it and jumped into it fall into the pit of ignorance which leads to perdition.